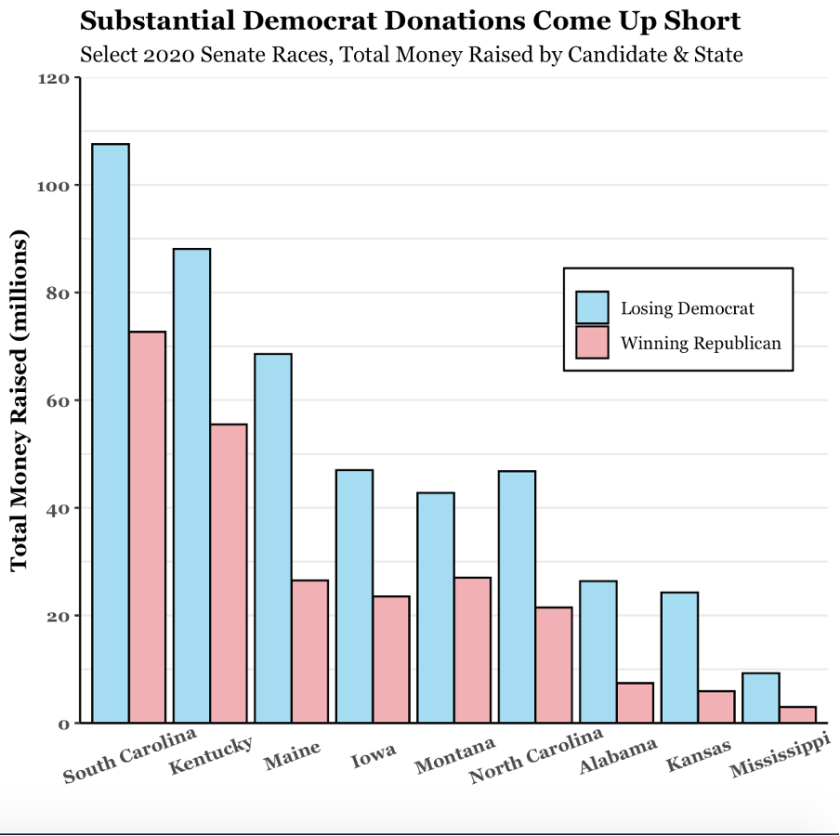 In the midst of still not knowing whether or not we will have a president that believes in the democratic process, we must not forget that there are other outcomes from Election Day. And the biggest take-away is that Democrats choked away eight Senate races to the Republicans.

Democrats collectively raised over a quarter of a billion dollars just for these three candidates, and over $460 million for all 34 Senate races for which they nominated a candidate ( Sen. Tom Cotton (AR) did not face a Democratic challenger). So far, only Mark Kelly of Arizona and John Hickenlooper of Colorado have been successful in ousting Republican incumbents. Sen. Gary Peters (MI) barely held on to his seat. We won’t get to know the results of the two Georgia Senate races until their runoff elections are finished in January.

Gideon in particular raised $42,065,919 more than Collins and was most recently polling 6 points ahead of Collins, only to lose by 8.8.

Democrats need to realize that their problems aren’t solved by raising a bunch of money for themselves rather than offering something tangible to voters. Saying that you offer “change” and that you’re not your opponent means things like not being represented by the Senate Majority Leader or Judiciary Committee Chairman to these voters.

They know that their problems don’t disappear just because they’re represented by a Democrat.

The data used in the graphs were taken from the Center for Responsive Politics through their website at https://www.opensecrets.org/. In addition to these eight races, 27 other Senate elections occurred Tuesday. Below is my first attempt at visualizing this store, showing donation totals for all Senate races that have so far been called.

For more information on the data used as well as any other question, you can reach me at fortunp2@miamioh.edu.