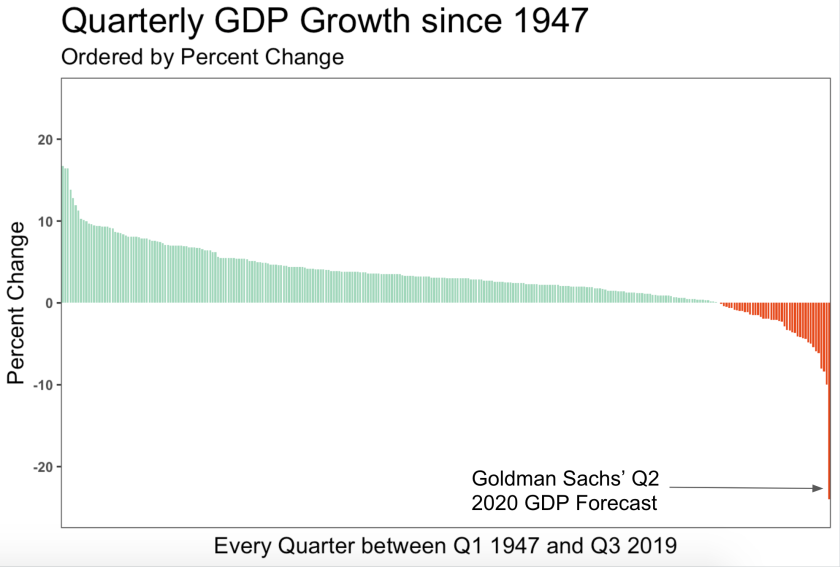 Yesterday, economists at the prestigious investment banking firm Goldman Sachs predicted that the U.S. economy will contract by 24% during the second quarter of 2020. This follows a 6% contraction for Q1, which ends March 31.

These forecasts are a result of the COVID-19 pandemic that has swiftly encompassed all four corners of the globe. In order to combat the spread of the virus, people have been told to stay home and practice social distancing.

On Thursday, California governor Gavin Newsom issued a shelter-in-place order for the state’s 40 million residents. Other states have since issued similar orders, portending that more compulsory measures are on the way for the rest of the country.

I was curious to see how Goldman’s Q2 2020 prediction compared to other quarters of GDP growth throughout U.S. history. I sampled every quarterly percent change of GDP since Q1 1947 and ordered each quarter by change in growth. This data is courtesy of the Federal Reserve Bank of St. Louis.

The resulting comparison is staggering.

When humans are forced to stay at home and are prevented from interacting and engaging with one another, economic activity grinds to a halt. Transactions and exchanges essentially cannot happen when we are told not to congregate in groups of more than “x” number of people.

As a result, the global pandemic is applying unprecedented stress on both the supply chains and demand curves, thus explaining the grave economic forecast. Economics has always been a discipline that has confounded me, but anyone can see how COVID-19 could very well wreck the economy.

Online commerce (e-commerce), while still a viable form of commerce, will not make up for lost revenue. According to the U.S. Census Bureau, 11.4% of total retail sales in the United States during the fourth quarter of 2019 occurred online (adjusted for seasonal variation). That figure is sure to rapidly increase in the coming months as the internet transforms into everyone’s workplace, social environment, and everything else that we used to take for granted.